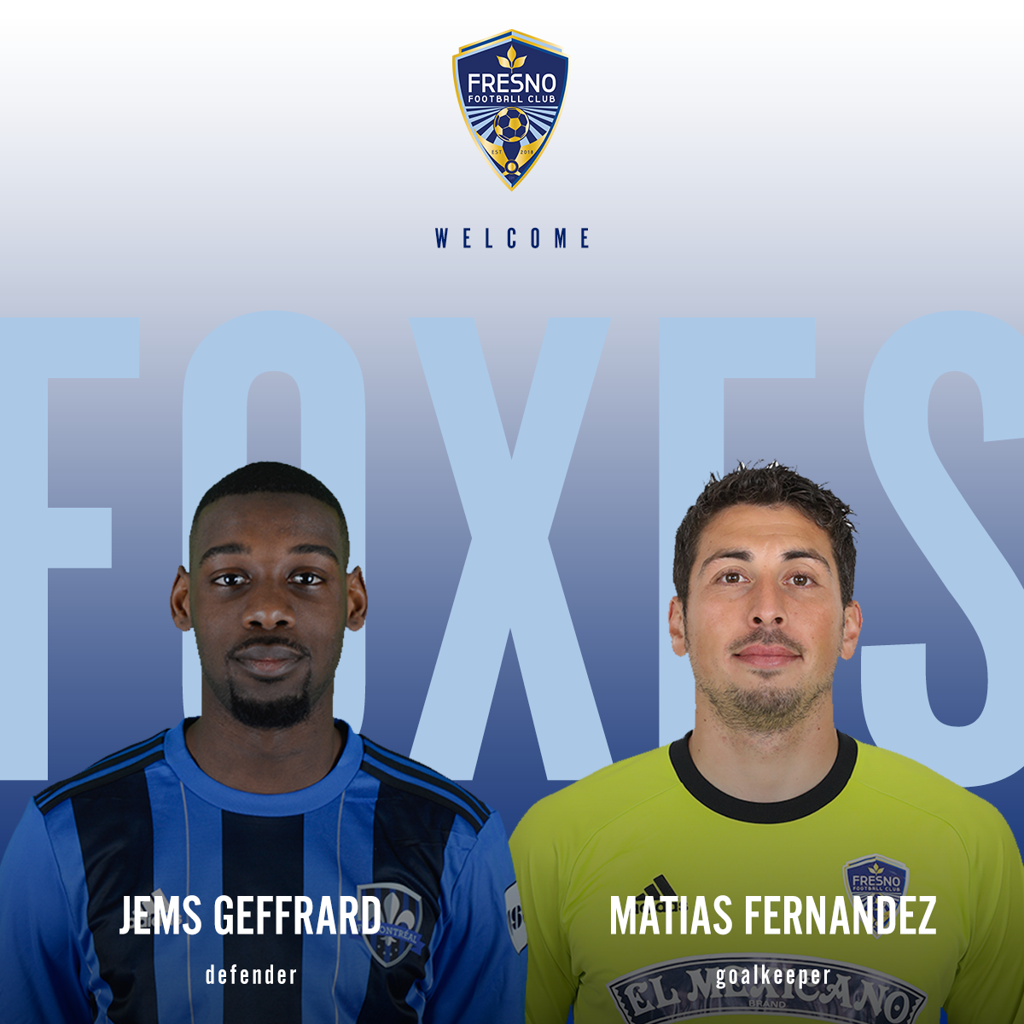 FRESNO, Calif. - The Fresno Foxes have inked their final two players for the 2019 season, the club announced Tuesday. Joining Fresno FC are Haitian men's national team defender Jems Geffrard and Fresno native goalkeeper Matias Fernandez. Geffrard, 24, is a 6-3, 195-pound center back who spent the last two seasons in Finland's top division between RoPs and Ekenäs IF. Fernandez, 26, was a member of the club's Under-23 side a year ago and spent several seasons with Fresno Fuego after playing collegiately at Fresno Pacific University. Fernandez is the sixth former Fresno Fuego on the 2019 roster. Geffrard will wear the #14 and Fernandez #30. Both players are immediately available for selection.

"We're thrilled to finalize our roster with these two great additions in Jems and Matias, who will help our team reach its goal of making the playoffs," said general manager Frank Yallop. "Jems is a physical center back who brings lots of experience and we will look to him to help strengthen our back line. Matias is another local product who has worked his way through the ranks to earn a spot on the first team. He'll continue to contribute to the team and bring depth between the posts."

Born in Montreal, Canada, Geffrard is of Haitian descent and has represented Haiti on the international stage, making four caps for the men's national team. A product of the Montreal Impact Academy, Geffrard went pro in 2016 with FC Montreal of the USL Championship. He appeared in 14 matches across two USL seasons with FC Montreal.

Fernandez is a 6-foot-1, 183-pound goalkeeper who prepped at Bullard High School before going on to play at Fresno City College and Fresno Pacific. He played parts of four seasons in USL League Two from 2015 to 2018 with Fresno Fuego and later Fresno FC U-23.

Los Zorros begin their challenge for the 2019 U.S. Open Cup tomorrow against El Farolito in the second round. Kickoff is set for 2:30 p.m. at Boxer Stadium in San Francisco. The match will be streamed live via ESPN Plus. Fresno returns to league action on May 22 against Austin Bold FC at Chukchansi Park.